The Crown Jewels Of The United Kingdom 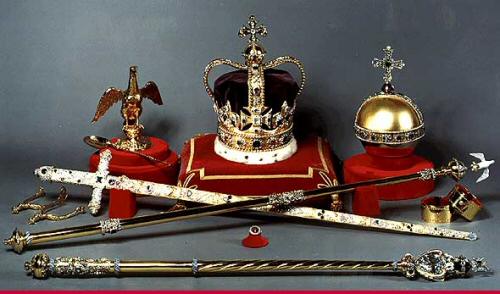 Though they’ve only been collecting them for about 350 years, the British crown jewels are still by far the most expansive set of regalia in the world. There are 141 items, from spoons to crowns. And even the most basic is probably worth more than your grandmother’s prized china collection.

Why is the collection only 350 years old, you ask? You can thank Oliver Cromwell for that. He took power in 1653 and became England’s Lord Protector. He was highly religious and a puritan to boot. Possibly more important, he wasn’t a king. So what was he going to do with a king’s regalia? As a result, he had the previous crown jewels at the time melted down and sold off.

Still, in the time the UK had they’ve done a pretty good job. The collection includes the biggest diamond in the world, the Cullinan I and the Cullinan II which was cut from the same original diamond. It also includes the renown Koh-I-Noor – which means ‘Mountain of Light’ in Persian – the Stuart Sapphire, St Edward’s Sapphire, and the Black Prince’s Ruby.

Today we’re going to explore some of the more interesting items from the collection. 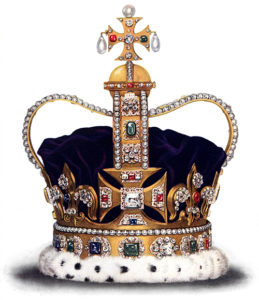 This crown is named after King Edward the Confessor. It is in many ways the most important crown of the lot (yes, there are several crowns). This is the one that’s placed on the monarch’s head during the coronation. It’s made of gold and has a ridiculous amount of precious and semi-precious stones set into its frame. 444 in all.

That makes most rappers look modest.

Of course, that does come at a price for the poor monarch. What is it? A sore neck! The thing weighs an impressive 2.23 kilos or about five pounds. In case you’re wondering how heavy that feels, fill up a gallon jug about 2/3rds of the way and try balancing that on your head. While you’re at it, go for a walk through your neighborhood and tell people you’re the queen of England. And share the pictures!

That spoon we mentioned before

This isn’t some ordinary spoon. Instead, it’s the coronation spoon. Fortunately, it would be hard to mix it up with the ordinary cutlery as it is 27 centimeters or 11 inches long. As an added point of reference, those four pips you see about halfway up its length are pearls. So you could scream, ‘don’t take the one with the four pearls in it!’ In case you’re dining in the Tower of London and somebody wants a soup spoon.

The spoon is used to hold the oil that the Bishop of Canterbury uses to anoint the king or queen to be. That’s why you have the two compartments, one for each finger. It’s also very old as it joined the royal collection back in 1349.

This is the scepter that the king or queen carries in their right hand when they are crowned. It’s made of gold (naturally). It has 333 diamonds, 31 rubies, 15 emeralds, 7 sapphires, 6 spinels, and 1 composite amethyst set into it. Or, to put it more succinctly, enough glitter for an 80s theme party.

Of course, all of that pales towards the diamond at the top. It’s the Cullinan I, which is the biggest diamond in the world. This stone is an impressive 530 carats, 106 grams or 3.7 ounces. 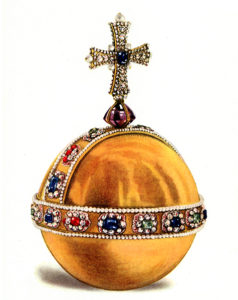 And if we’re going to mention the right hand, then we also have to mention what their royal majesties carried in their left. It’s an orb. An orb? Yes, an orb. I don’t get it either, but supposedly it signifies the Christian world. The big cross on the top kind of hints at that.

I’ll let you guess what is made of. I’ll even give you a hint. The kings and queens of England seem to like it. No, it’s not candy floss. As gold is kind of heavy, the sphere is hollow on the inside. Otherwise, people would be walking around with a crick in their neck and sore muscles down their left arm! As you can see from the picture, there is a full band around the equator set with diamonds and a half band which arches to the top with the aforementioned cross at its center.

In total, they needed 375 pearls, 365 diamonds, 18 rubies, 9 emeralds, 9 sapphires, 1 amethyst and 1 piece of glass to set that band. I wonder if the country had run out of precious stones when they had to fill that last space. “Let’s just use a piece of glass. Nobody will ever notice.”

So there you have it. Four items from the collection of the British crown jewels. Of course, that means there are 137 left. But to see those, you’ll have to go to the actual Tower of London. It’s well worth it. It’s a stunning collection of truly priceless artifacts.