Hidden Truth Behind Power and Gold In Ancient Colombia 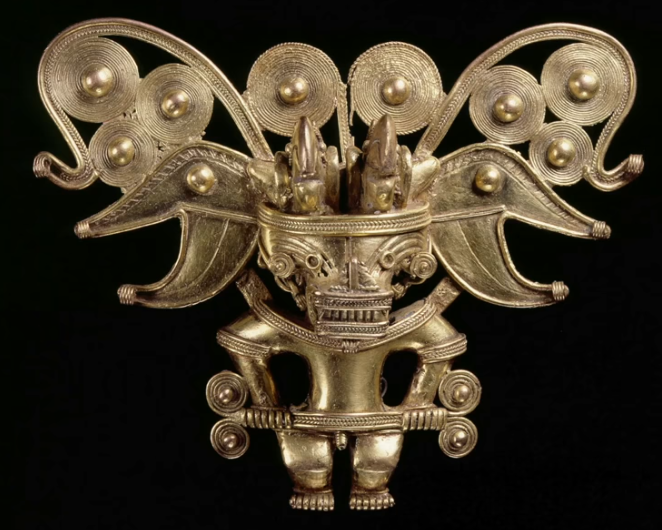 At first, people only see the goldwork, but there’s so much more that very few people know about…

There’s a culture and people’s identity behind all this gold because, at that time, they expressed themselves through the gold. It was their way of seeing the universe.

The pre-Hispanic people saw gold from a different perspective than the European and Western world.

People from Europe saw gold as the monetary value, while people in ancient Colombia saw it as a symbol of something supernatural. It was a symbol of importance, of a higher status.

The biggest misconception is that people still think that this precious metal was the only reason why pre-Hispanic people had so much power in the past. Besides gold, very few people know that pre-Hispanics had ceramics and stone works which were very important in ancient Colombia as well.

Precious Gold Items That Were Important In Ancient Colombia

From all the gold and ceramics, this one stands out the most to me…

This item was hanging on the chair of the person with the highest status. If you look closely enough, you will see that it represents a human being transformed into a bat. So, it’s some kind of a Batman.

What most people don’t know is that pre-Hispanic people thought that transforming their human appearance into a bat or some other animal is a sign of power that usual human beings don’t have.

Also, they believed if they transform into a bat, they could explore things their community doesn’t know about and come back to reveal everything to them.

So, people in ancient Colombia…

They believed in life after death

In ancient Colombia, people believed that after death, they continue with the new life as a supernatural figure. So, when a higher-status person would die he would be buried in a tomb with a lot of gold and wearing a gold mask.

You could also see this concept in Ancient Egypt as well.

This spectacular mask was placed on the top of the face of the body at the time of the funeral, which was the ritual to give that person a supernatural ability to transform into an animal.

This is one of the most famous and fascinating museums in the world that showcases pre-Hispanic cultures in ancient Colombia with over 55,000 pieces of Gold.

The museum is laid out in a logical direction over three floors.

On the second floor, you will find a lot of mixed animals rendered in gold. Pre-hispanic people believed that transforming into animals would be a sign of something supernatural that human eyes can’t see.

Other golden artworks were used as a decoration for clothes and the body. Usually, they outlined the frame of an individual and his or her belonging to the community in addition to the higher-status of the group.

Take a look at some of the photos of the animals covered in gold from Museo Del Oro:

They were crafting tumbaga (a combination of gold, silver, and copper) which represented ancient Colombian’s imaginations and wishes, mostly associated with the Sun and Moon.

Tumbaga would be turned into unique objects either with casting or hammering. Ancient pre-Hispanics mastered both techniques, although the casting of metal was developed the most.

What they would do is hammer the metal and make it breakable, then dip it into the water before the final form is achieved.

Then, they would cut slim sheets of gold, decorated by folding several sheets together.

As the casting of metals was used often, pre-Hispanics developed a special wax technique. After the artists modeled their piece of art with beeswax, it was covered in clay and charcoal.

Then, molten metal would placed into the mold, where it slowly cooled, casting its form. The mold would be broken and the final metal piece polished and finished.

As you were probably thinking…

Ancient Colombian artists had great skills because they had to produce hollow objects with the same technique.

When you realize that they had to make the figure, add a thin layer of wax & clay and insert the wooden pegs – you can see that we’re not talking about average artists.

They had to control the entire flow, every detail, and then complete the whole figure without damaging it. That’s why these projects were done by the most experienced hands.

The Myth of Ancient Colombians

There’s a quite fascinating story (myth) about El Dorado meaning “The Golden One”.

The El Dorado was a ritual at Lake Guatavita where the newly elected leader was covered in powdered gold and dove in the lake as a ritual of becoming chief of the Muisca.

This was the sacred lake where the locals worshipped Chie – the goddess of water. This myth gave rise to the legend of El Dorado.

This ritual was done in order to bring the chief of the community (Muisca) closer to God.

You can see that pre-Hispanics appreciated gold as it was their way to show respect to their unique culture.